The Best Tower Defense Games for Android: Possibly one of the genres that have benefited the most from the characteristics of mobile devices has been that of ‘tower defense.’ That is the titles with which they combine strategy and defense components to repel continuous hordes of attacks from the machine. They put the user’s skills to the test to succeed in games characterized by frantic and fun. That is why we have made a selection with the best tower defense games for Android, and our recommendations to download on Google Play are Plants vs Zombies 2, Kingdom Rush, Anomaly 2, Defenders, Guns’n’Glory WW2, Jelly Defense, and Defense Zone 2.

One of the video game genres that has benefited the most from the mobile ecosystem is ‘Tower Defense,’ a genre of video games in which the player must defend a certain place from hordes of enemies who want to demolish him. The fact that the user has complete control of what is happening in real-time in the game with the touch screen facilitates the experience of these types of Best Tower Defense Games for Android. Many of the things that criticize mobile games the most are how difficult it is to control them, but this genre is one exception. The screen of touch devices has favored tower Defense. For this reason, many times, we prefer to recommend that users play this type of game on mobile phones rather than on other platforms.

It is not only one of the best Tower Defense games on the market, it is one of the best games ever made for mobile. Many may have played it already, but if you are one of those who have not, you should already know these days that the game consists of being a gardener who plants to defend himself against armies of zombies. This game is very well done. It has an excellent stage design and excellent music. Also, the second part will soon be released, which is expected to be equal to or better than the first. So if you want to be in the game, we recommend playing the first edition of PvZ tower defense game and thus be prepared for the second installment.

Talking about the Best Tower Defense Games for Android and not mentioning its maximum modern exponent would have a crime. The second installment of the colorful fight between plants and zombies provides many more hours of gameplay, a multitude of more defensive plants, and an increasingly long and hilarious variety of zombies. I do not think many people have not yet enjoyed this game or its mythical first installment, so do not hesitate too much if this is your case.

The traditional Tower Defense Games for Android cannot be said to have innovated too much during its history: we have to place turrets that can fight the hordes of enemies that try to devastate our base.

Radiant Defense is one of the few examples that tries to do things differently with a single addition: we can place blocks on the enemies’ predefined route to force them to travel through paths that suit us best. A very funny work with a very colorful visual aspect.

This game started as a free game on the internet and is now one of the most popular applications on the market. The game is simply one of the best games available overall.

In this one, the player controls four types of towers that he can place in different places to defend himself against armies of fantastic beasts. As the game progresses, the player has the option to improve their towers and skills. The game has too many things well done: The characters’ voices, the music, and the gameplay. If you are a fan of ‘Tower Defense,’ this is a must-have.

The action takes place in the year 2018 when the Earth has been invaded by alien machines and humanity is on the brink of extinction. Transform your troops into war artifacts, in which each unit has a different mechanical form with various abilities that will help you overcome different combat situations .

You never have to say no to a good classic and even less to this Castle Creeps TD that has become a huge hit thanks to its long duration and the roleplaying touches it presents: leveling up our heroes and towers to customize the experience of the game. Its development is something old, but it does not stop being less fun.

Repel hordes of evil mutants, created by a disaster of cataclysmic dimensions, in this game that combines the ‘Tower Defense’ and collectible card genres. Freeze, burn poison, blast, and smash countless enemies trying to prevent you from recovering artifacts from the old kingdom.

Choose your side – the allies of the United States or the German Axis – and lead your troops to the front line of World War II, in vibrant offensive and defense strategies in which you will have to control four different types of units to overcome up to twelve maps with three difficulty levels.

The classics never die, and this Castle Defense 2 is a clear example of this. In addition to the possibility of building a good handful of different towers, we also have powers and heroes with which to prevent orcs and other enemies of evil from achieving their goal. It cannot be said that it is the most innovative Tower Defense, but it has a very colorful audiovisual section and screens at large.

Join the Jelly forces and lead them in the battle against the invaders to glory. Use your tactical skills and wisdom to tip the scales of victory in your favor, and save the Diploglobe and the Jelly nation from their attackers.

Game war in which the player will have to prevent waves of enemies manages to reach the end of the road, placing defensive measures that depend on its value or function damage in varying degrees enemies.

Don’t be scared by its cool and simple graphics. Grow Castle is pure genius and fun. A fast title where we will have to know well what to invest in the coins that will report our enemies’ deaths. 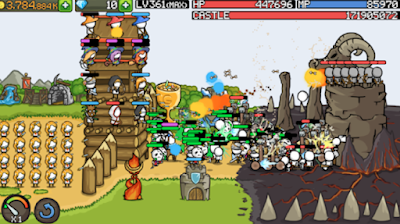 We can make our tower stronger, with a graphic change in it, or improve our units to be more powerful to face increasingly gigantic dangers. These choices between horde and horde will be key to surviving to the end—one of our favorites.

The children of Kingdom Rush are many, and we have already included several in this list, but perhaps Realm Defense is the best of them all. It is not the most original title, but it does everything well: we have a multitude of towers available, a fairly top technical section, and a tremendous amount of levels to play—a most outstanding title.

The epic of defending our fortress alone is a must try, and Watcher Defenders is one of the best games to do so. This retro love title combines a difficulty typical of times of the past that goes very well with its beautiful pixel art and chiptune music. The enemies attack us from all directions, and we will have to go up and down the floors of our fortification based on vertical slides. The game has a frenetic pace and complicated final bosses at the end of each screen. What can we ask more of life?

One of the world’s genres that have been best adapted to mobiles and tablets is Tower Defense. The Best Tower Defense Games for Android titles that we will mention next are the best that have been made for mobile devices. If you know of any that you like and want to share, you are welcome to recommend it in the comments section.